I am posting a story I read this morning from “The Bolen Report,” a bit long, but something I have been praying for over the past several decades.  Pray for the People who have to fight their local districts to bring sanity back to our K-12 local schools.  The Story was written by Elissa Meininger, Historian & Health Policy Analyst.

Thanks for reading and following Bob’s Opinion… R.S. Helms 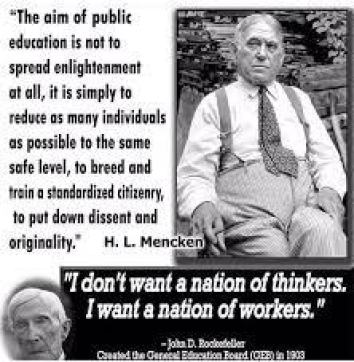 I don’t want a nation of thinkers.
I want a nation of workers.
Rev. Frederick T. Gates, Business Advisor to John D. Rockefeller Sr., 1913 [1] expanded upon  Rockefeller’s goals.
“In our dream, we have limitless resources, and the people yield themselves with perfect docility to our molding hand.  The present educational conventions fade from our minds; and, unhampered by tradition, we work our own good will upon a grateful and responsive rural folk.  We shall not try to make these people or any of their children into philosophers or men of learning or of science.  We are not to raise up among them authors, orators, poets, or men of letters.  We shall not search for embryo great artists, painters, musicians.  Nor will we cherish even the humbler ambition to raise up from among them lawyers, doctors, preachers, statesmen, of whom we now have ample supply.”
The General Education Board was not interested in encouraging critical thinking. Rather, its focus was on organizing children and creating reliable, predictable, obedient citizens.  As award-winning New York City teacher of the year John Taylor Gatto puts it, “school was looked upon from the first part of the 20th Century as a branch of industry and a tool of governance.”   The Rockefellers, along with other financial elites like Carnegie and Vanderbilt, have been able to mold society by funding and pushing compulsory state schooling for the masses.
President Woodrow Wilson explained his support for mass compulsory education.

While I was doing research for this article, I learned that throughout the creation and running of our government-controlled compulsory school system, every Tom, Dick, and Harry claiming to be an expert promoted ideas, mostly Marxist, and utilized all manner of psychological techniques in order to basically brainwash students into conformist thinking.  To promote critical thinking and the desire to be a creative, self-directed individual was to be discouraged at all costs.  In addition, there is a constant need to diminish the values of religious teachings, the existence of God and the authority of parents, as they interfere with the authority of school officials to program their students.  In short, as we see in the news every day, personal values, civilized behavior, and independent thought are shunned in favor of emotional outbursts designed to cut off thinking or allowing unapproved non-group ideas to be heard.
Of the many quotes I read from these so-called experts, many have no respect for the authority or values of parents. The most egregious one I ran across was the one Harvard psychiatrist, Chester M. Pierce provided at his keynote address at the 1973 Childhood International Education Seminar in Colorado:
Every child in America entering school at the age of five is mentally ill because he comes to school with certain allegiances to our founding fathers, toward our elected officials, toward his parents, toward a belief in a supernatural being, and toward the sovereignty of this nation as a separate entity.  It’s up to you as teachers to make all these sick children well by creating the international child of the future. (P.284 Kindle)
Even more chilling is the government policy discussion to promote “chemical experimentation” on minors in the schools, to, no doubt, provide a chemical straightjacket for little Johnny in the first row.  He is probably fidgeting because he’d rather be out in the schoolyard blowing off steam rather than inside listening to some boring and meaningless classroom exercise.  You have to wonder about all the mind control drugs we give our children these days that we never heard of a generation ago. (P.5 Kindle)
Then there was John Dewey, considered the father of modern education and who was an avowed atheist and Socialist.
John Dewey and his colleagues are responsible for deciding that since high literacy was an obstacle to their progressive agenda, the NEA needed to reduce emphasis on reading. Dewey’s agenda has produced absolutely tragic results in American education. He and a few other progressives brought in the system of “social studies.” Naturally, this direction soon edged God out of public school curriculums as Dewey disparaged schooling that focused on traditional character development. It’s no wonder today’s youth have a distorted view of our founders.
Dewey, in one of his famous quotes, said:
There is no God and there is no soul.  Hence, there are no needs for the props of traditional religion.  With dogma and creed excluded, then immutable truth is also dead and buried.  There is no room for fixed, natural law or moral absolutes. Dewey was also a major player in the Humanist movement, which has been using the public school system for almost a century to remove the basic values first laid out by the Puritans that were the basis of the American Revolution

One of the big fights of recent years is in regard to what is called “outcome-based education”, a set of theories that, when instituted, not only exacerbate the many problems already in place but aims to further alter the future of America.  They want to ensure that we will soon be a socialist country.

Even if you hate Trump, please understand how by giving us the right to decide what our children learn in government-run schools, he has given us the most powerful weapon we could have to restore the values that made our country great in the first place.
It’s been over a century of schools run with a Marxist agenda to manipulate and control the minds of future generations that is the heart of our culture crisis. Seeing children with bad manners scream and sometimes use violence to silence anyone who thinks differently is a desired result.  Chaos in the streets and a mob that is easily manipulated by constant hate-filled “news” from “official” sources and social networks are exactly what Marxist manipulators can use to destroy our political system as we know it.   You might want to send President Trump a thank you note so he knows you “get it” and appreciate that he gave you a major tool to restore order.
Get a group of like-minded people together and start working with school officials to see where to begin turning the curriculum into what the leaders of society both here and abroad provide for their children.  Remember it is not about spending a lot of money.  It’s about knowing what you want for your children.  You might check with parents who have already pulled their kids out of public school to see what teaching materials they use.  Homeschoolers have very interesting teaching tools and some of the private schools have interesting ideas on how to build character and think creatively.
Just remember, President Trump knew that if he removed the authority of the federal government to control local public school curricula, alert parents and others could figure out for themselves how to get the Marxist manipulators out of the system.
We need a concerted effort to rescue all the kids currently there and make sure future generations can think and act like fully-functioning adults.  Then we will have Made America Great Again!
Some Interesting Resources
School Sucks Project
Books by John Taylor Gatto
Home School Curriculum Reviews
https://tuttletwins.com/

One thought on “TRUMP OPENS DOOR … …”