Sorry, Democrats, But Your Stars Are Socialists
Posted Monday, April 22, 2019, 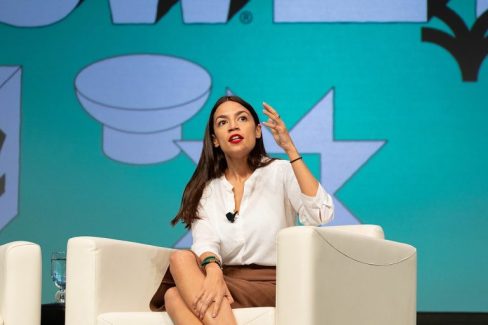 There was Bernie Sanders at a Fox News Channel town hall, not giving an inch in a forum every Democratic presidential candidate has shunned.
His reward was a cataract of good reviews and monster ratings. Sanders had a solid hour to try to reach people not favorably inclined to his worldview, at the very least demonstrating that he’s willing to show up outside his political silo.
Why hadn’t any of the other Democrats done it before? Because they lacked the verve and ideological self-confidence of Sanders, as well as the independent streak to buck the Democratic party’s attempt to hold the line against Fox. As a message candidate, Sanders is willing to take his anywhere.
Speaker Nancy Pelosi, miraculously transformed into a relatively moderate Democratic elder stateswoman, has understandably been pushing back against the notion that she leads a socialist party defined by a few radicals in the House.
On 60 Minutes, she stalwartly declared: “I do reject socialism as an economic system. If people have that view, that’s their view. That is not the view of the Democratic party.” She dismissed the left wing in her caucus as “like, five people.”
In sheer numbers this is true, but it’s the wrong way to count.
The fact is that the most compelling stars of the party are self-declared socialists with a knack for generating controversy and media attention, and with committed mass followings. Pelosi might wish it weren’t true, but poll numbers, fundraising, and follower counts don’t lie.
Sanders is reliably second — sometimes first — in national and state presidential polling. He’s outraised everyone else in the field and, with his massive small-donor base, probably can continue to do so for the duration. More than anyone else, he has defined the Democratic party’s current agenda.
It’ll be much harder to maintain that the Democratic party isn’t socialist if it nominates one as its presidential candidate, which everyone paying attention realizes is a real possibility.
If this happens, it won’t be the work of conservatives hoping to negatively brand the Democrats, but of the party’s faithful. The same goes for the prominence of Alexandria Ocasio-Cortez. It is often said that conservatives are “obsessed” with her; maybe so, but the same is true — and probably more so — of everyone else.
AOC has been on the cover of Time magazine, Rolling Stone (with Nancy Pelosi, as it happens), Hollywood Reporter, and Bloomberg Businessweek. Annie Leibovitz photographed her for Vogue. She’s been interviewed by 60 Minutes.
She has nearly 4 million Twitter followers and more than 3 million followers on Instagram, where she feeds the insatiable obsession of her fans — not her critics — with videos from her apartment.
She was among the top 10 House Democrats in fundraising the first quarter and had the highest percentage of small donors (her ally, Ilhan Omar, also excelled).
It’s obviously vexing to Pelosi to see a House majority built by the careful avoidance of ideological extravagance and won in marginal districts hijacked, at least in terms of public attention, by a few freshmen and a 77-year-old Vermont socialist.
They might not define the center of gravity of the party at the moment, and the radical freshmen have lost most of their tussles with Pelosi. But there is a reason that they are so famous, with such fundraising prowess. The crusading purity of Bernie Sanders has an inherent appeal, and the outrageousness of the freshmen attracts attention, which always begets more attention.
Yes, there are vast numbers of Democrats out there who aren’t on Twitter or Instagram. Maybe there are enough of them to nominate Joe Biden, or a Pete Buttigieg can win on a progressive platform clothed in a moderate demeanor.
But the party’s stars will have something to say about it. The great Zionist Theodor Herzl maintained, “It is the simple and fantastic which leads men.” As Bernie Sanders showed, it’s also willing to go on Fox News.
by Rich Lowry