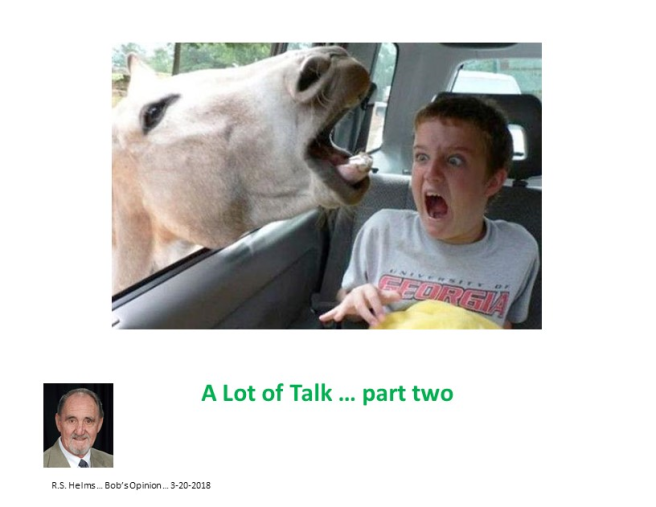 Of course, this is my opinion, the name of the blog “Bob’s Opinion,” should more than indicate that it is my opinion, my studied opinion but still an opinion. It is where I am able to say what is on my mind, what I think and what I believe. It is an “op-ed” journalism post of opinion. Now, with that said, we need to get on with this post “A Lot of Talk” part two, being pro-active in stopping mass murders, (mass shootings, or any shootings), and make it possible to restore the second amendment rights of the citizens of our nation.
Every time there is a shooting the knee-jerk reaction of the left wing is to stage demonstrations and fake news journalism to attack the second amendment and the right to bare arms. More gun legislation, and gun seizure. All this before the mainstream media hacks are giving their impersonation of a forensic autopsy and a complete dissection of the incident, and the shooter. Meanwhile the mainstream media and liberal politicians are pimping the tragedy.
A lot of talk as far as any serious measures to stop this madness of terror and slaughter of our innocent children and young people. We need action, and not more milking and pimping such an evil tragedy. If the amount of money that is spent by the left-wing radical activists and put it to work in PREVENTION we might get something done to secure the safety of the people.
The things that the shooters have in common is that they have some degree of mental or personality dysfunction; in other words, they are crazy as a loon. Okay some degree of personality dysfunction that creates a sociopathic or psychotic behavior trait that is really quite volatile, and we don’t want a meltdown episode. That is when they become violent and plan and execute mass murder. We need to be able to stop them from killing people especially children and young people. Another common trait is also a common trait found in terrorism, absolutely no value of human life.
There has always been those who commit mass murder, but not in the rate of occurrence that there is now. There is motive and triggers that need to be addressed, but, first the individuals or individual must be identified, and their threat evaluated, as mental dysfunction, criminal, terrorist, or just radicalized beliefs. and still within due cause and due process. However, as President Trump pointed out if we start with due process first, it could be the process that takes away valuable time, time that no one knows will end, we must assume the fuse has been lit and no one knows how long it will burn before BANG!
Don’t for one-minute think that all mental cases are dumb, no they are some mental people that are brilliant, able and have no fear. Four prerequisites for a planned attack. And of course, with the people that we are dealing with one thing is really not totally in place and that is the fear factor. Most will pick a soft target, it is easy and poses no resistance. Why do you think the socialists want to take our guns away? There will be no resistance during a mass takeover.
Nonetheless, the first obstacle is to identify the potential shooter or shooters. I doubt if strange behavior would cause enough attention to get reported as it now stands and most citizens would fear a lawsuit, it is coupled with identifying possible intent along with behavior. The police have a probable cause detainment at the present, it however, is only good for 72-hours at a psychoanalysis ward in the hospital. It is used for sociopathic and psychotic episodes and is to provide the patient with a period to reduce the acute anxiety or psychotic episode or to reestablish medication schedules, or detox, then to provide behavior observation, diagnosis, and proper prescription medication reaction. There is simple not enough time in a 72-hour sociopathic or psychotic observation, let alone the other areas of diagnosis, observation and treatment.