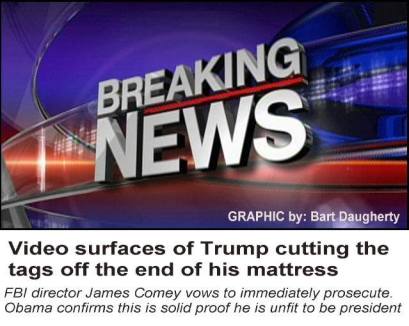 I just reposted an article to FB and Bob’s Opinion (rshelms.wordpress.com), it concerned me that the liberal congress would try such a maneuver, even for their Mainstream Media.  The anti-Trump Rep. Erick Swalwell, D-Calif. – who says he’s been inspired by President Trump to propose a law making it a federal crime to “intimidate or attack journalists.”

This is my reply to Rep. Erick Swalwell, D-California.

First, sir, I would think twice about withdrawing such a bill as a liberal Representative of the State of California, who is now fully engaged in not cooperating with federal law enforcement officers who are trying to enforce federal law concerning illegal immigration and the safety of the citizens of the United States.  So, until your liberal controlled state sees fit to cooperate with the federal government I would simply forget it.

Next, I would make sure that the liberal “Mainstream Media” recapture their journalistic integrity and re-establish their ethics of journalism.  It seems what is good for the goose is good for the gander in this situation.

Over the past couple of decades, the “Mainstream Media” has abandoned all ethics, integrity and moral values in their journalism by claiming they were just joking, giving full reign to liberal comedians to say what they want about anyone they choose, which never includes any liberals.  The newsrooms of the MSM has created the “fake news” while hiding behind the freedom of the press of the first amendment and the right to keep their sources anonymous.

Anonymous indeed, if they truly have an anonymous source for the crap they are printing and airing, they should at least verify the information before they use it.  They lie, and don’t report the whole news or news that would go well for the opposing political party.  For instance, they ran in the article screen grabs of who is reportedly President Trump body slamming a CNN reporter.  And Swalwell used that as an illustration, however, he never brought up a screen grab about the liberal (comic?) Kathy Griffin holding up the severed head of President Trump.

In other words, I find it disgusting and very offending the way Journalist lie, mislead, support liberalism, political corruption and lawlessness by committing liberal protected propaganda assaults on the citizenry of the United States, our Constitution, our freedoms, and our values.  It is as if those leading our media standards like the UPI and AP have all been graduates of the Soros Funded American Prospect, Inc., and American Independent Institute (formerly American Independent News Network), who do a great job at mentoring journalist for leftwing or Mainstream Media. Both offer grants up to 350k to liberal investigative journalists.  The American Prospect, Inc., offers on the job training staff positions as content writers for print and social media.

All of the co-sponsors are in most part brain-dead and it is my opinion that they have received a considerable sum of laundered money in their pockets, otherwise they would simply just continue with using the MSM for their radical leftwing propaganda and displaying their total stupidity and being so out of touch.

The MSM is badly losing the battle for the attention of the American people, people like me who still have a free mind, only visit MSM on local channels and the occasional national news on CBS, ABC and Fox Business, the rest is from trusted (personal trust) news feed, and email newsletters, again from personally trusted friends, blogs and organizations.  Of course, most are conservative and conservative (Biblical Theology) Christian organizations and individuals.  It has taken nearly 14 years of paying attention to eliminate the wolves from the sheep.  There is no perfect way to actually decide who is ideologically and theologically friend or Troll.

Not that I like preaching to the choir but, I do enjoy positive conversation on a variety of subjects.  No, I suffer enough leftwing haters and black racists, homosexual activists, anti-Christian and liberal-liberation theologians and misled sheep.  Liberals who have been drinking too much cool-aide, love to troll and be outraged over anything I write, so now I am responding to the liberal congress who are trying to help save the liberal MSM; I would presuppose that their outrage will be quite nasty, as how dare I to criticize the MSM and their ethic-less hate group of so called journalists.  Journalists, who would sell their souls to Satan for their liberal puppet master’s.

If I were a betting man, which I am not, (Its against my religion), but should I be, odds would favor that some of the individual fortunes of some of these journalists, which seem to be growing like a protected stock Ponzi scheme, it seems they just keep getting more and more the worse they get.  They have no morals, no ethics, no values and their integrity?  In the sewer.

Now that they have been brought to account for their reckless and “Fake” news certain members of congress pocket laundered money for the introduction of a bill that protects them from getting criticized for the farce they are.  It is my studied opinion that they are paying lawmakers to push a bill that would make them above the law and totally unaccountable for what they put out as news to inform the American public.

This is my opinion, my studied opinion.