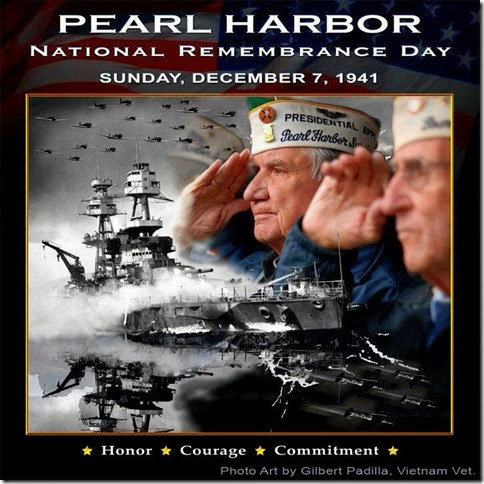 Today is the seventh day of December, a national day of remembrance, remembering the horrific atrocity of war. However, it is the twenty-four hundred and two brave men of the United States Navy, who sacrificed their lives for our sovereign nation and our freedoms. Another Twelve-hundred and eighty-two souls were wounded. Brave men all even the ones who were not wounded or lost their lives.
77 years ago, and each year we relive it, but over the past decade, we have noticed the press cover it with less and less coverage, unless they can paint a picture positive to their socialist political agenda. But December 7, 1941, will live on for a long time in the hearts of the American people, regardless of how hard the socialists try to indoctrinate our school children, there is enough of us who still believe in the United States, our constitution, our Sovereign Nation, our freedoms.
What happened 77 years ago today, should remind us of the sacrifice that those brave seamen gave for our freedom and all the brave men before and since who have given life and limb for our freedom, for our free and sovereign nation. Remembering Perl Harbor is important, important to our culture, regardless of the turmoil that we find ourselves in concerning global socialism, over the past five or six decades we have been headed directly in that direction, only over the past decade have all the socialist ideologies come to an assault on our nation.
This assault has been weaponized by the liberal/socialist politicians and liberal Christianity. The assault is not on our naval strength at a safe harbor, but against our constitution and our sovereignty. Our war is not a bloody destruction of humans, but the destruction of the United States, as we once knew it. The nation that the December 7, 1941 Sailors gave their life and limb to protect.

God bless this day of remembrance let it stand forever a marker for our freedom.