From – The Daily Caller – by Benny Johnson 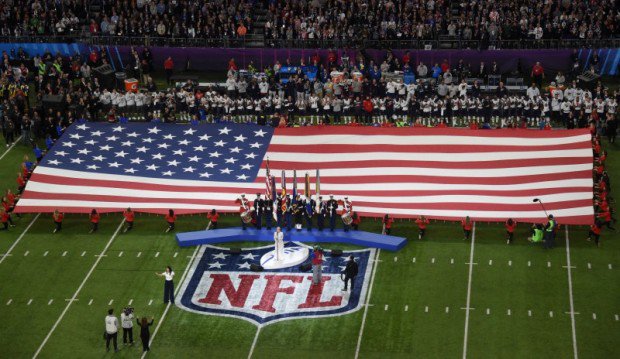 Watch the Anthem on the link below. (great)

The NFL has had a tough season with players kneeling during the national anthem.  The mass anthem protests by hundreds of players has angered President Trump and NFL fans alike. The protest has led to cratering ratings and a drop-in ticket sales for the league this season. Outraged fans burned their jerseys and the approval of the NFL plummeted.

As the New England Patriots faced off against the Philadelphia Eagles in Minneapolis on Sunday, the players took the field.

As “America the Beautiful” and the national anthem were sang, an enormous flag was unfurled over the field.  There was red, white and blue everywhere and the military color guard presented the colors. Pop star Pink sang the anthem and all players remained standing, respecting the flag. After the anthem, there was a dramatic Air Force flyover of the stadium.

All-in-all, it was a beautiful year.

Thanks for reading – R.S. Helms